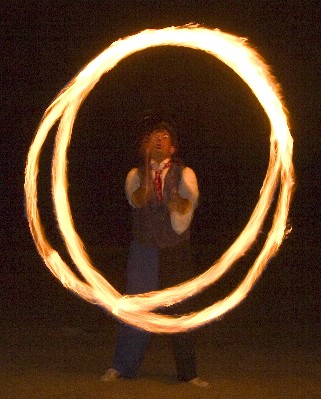 Owen Baker-Flynn is one of San Francisco's finest entertainers.  He juggles, does magic, balances stuff, spits jelly beans and does a really weird thing with his head and neck!  His show is fun for the WHOLE Family!  He is available for parties, schools, libraries, school libraries, conventions, rock videos, major motion pictures, stop motion pictures, grand openings as well as so-so openings, malls, mauls, rec-centers and wrecked centers!

Owen has been performing all over the San Francisco Bay Area with annoying regularity for over 20 years! He's been on TV, movies, and corporate videos and the voice in Anno's Math Class.  He has won awards in Mime and Cartooning. He is married to an award winning teacher and has two kids, a 16 year old daughter who is just learning to drive (So look out!) and a ten year old son who both tolerate his existence.  Barely.