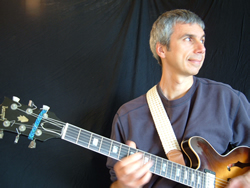 I studied guitar and Jazz Composition at the University of Miami, FL with Randall Dollahon & Ron Miller. I also studied with John Hart, Dave Creamer, Barry Harris & film-scoring with Laurent Petitgirard.  I moved to San Francisco in 1987 where I now work as a free-lance guitarist, bandleader and educator-- with performances at the world-renowned Jazz club Yoshi's with my own Quartet, at the SF Museum of Modern Art, at local Jazz Festivals, and at the Mill Valley International Film Festival.

Wrote the original score for the experimental film "The Making of El Capistrano" by avant-garde director Claire Bain. Original music performed by the Bruno Pelletier-Bacquaert Quartet is also featured on the 2006 television movie "The Best Kept Secret", produced by the San Francisco Academy of Arts University and made for the "Documentary Channel".