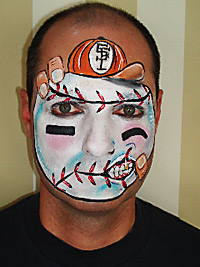 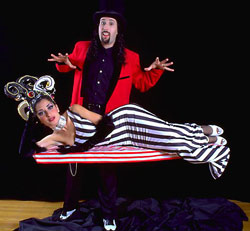 Gigi proudly hails from Queens, New York. She now hangs her many hats (and wigs!) in San Francisco, and is lighting up the events scene all over the bay area. She has worked in film, television, theatre and circus. She has performed opposite Josh Kornbluth in the movie "Haiku Tunnel", worked with   Robin Williams on MTV, and left her uncle Angelo in stitches (at the hospital). She was featured in numerous commercials and worked opposite Cheech Marin in "Nash Bridges."   Her one woman comedy show "The Psychic Shopping Network" was voted best of !Viva Variety!, and was an award winner by Misdirections Magic Shop.  She has ring mastered for Velocity Circus and served as their lead company member for over 10 years. She co-starred In their long running shows, Castlopolis and Heliosphere Junior. She continues to perform comedy characters and also serve as a theatrical make-up artist.  She has appeared, disappeared and reappeared around the country with master magician Jay Alexander, entertaining fortune 500 companies, theatre audiences, and each other.